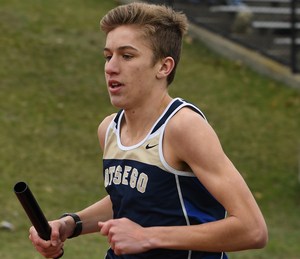 Junior, Alex Comerford, continues to make his mark in Otsego running history. He now holds four Otsego school records and just broke through a major threshold to be a top-level recruit.

The spring track season has been anything but typical for Otsego junior Alex Comerford. With aspirations to be a professional runner someday, the time is now to show what he’s got. This junior track season is what scouts are watching; in reality, his entire future is resting on these two months. “It’s hard,” says Comerford of the pressures of this moment, “I don’t think people realize how much is on the line. It’s a big season for me.” His sights are set on being able to run at a Division I college. His goal is to be an NCAA champion or All-American. But to do that, he’s had to focus solely on getting faster, “I have to set myself up to go to a college that can get me to the level where I can run professionally and do that for a living,” he explains.


To accomplish this, he worked out a schedule to split his time between Otsego’s regular season meets and entering larger, statewide meets where he faces runners from all divisions across the state. The magic number to get noticed from big schools - and get big scholarships - is 9 minutes in the 2 mile. This past weekend, he accomplished that at the Golden Triangle Invitational and broke two Otsego school records in the process. He ran 9 minutes flat in the 2-mile, a school record, and ran the 1-mile in 4:13 coming in 3rd, another record. Teammate Will Finch also raced the mile coming in 8th with a 4:17.


Hitting that 9 minute mark was 17 seconds faster than his previous best and puts him at #22 in the national ranks. And he’s been eyeing those school records. “I never really thought it would happen this early in the track season. It’s been something I’ve wanted to do. It feels really good to be able to do it. It’s a big weight off my shoulders. Now, I can focus on running and just go out and do what I love to do.” He holds the school record now in the 1 mile, 2 mile and 5K and is a part of the school record 4x800 relay team from 2017.


He’s accomplished a lot so far, and it’s come with some sacrifice. “It’s a lot of pressure to do this, and hard to do something different from what the rest of the team is doing. I think it’s hard for people to see that it’s something I needed to do. It’s weird not running everything the rest of the team does; but, I have to go to those meets to get those times.”


He understands that difficult decisions come with the territory of big goals. His sister is swimmer Mallory Comerford who is nationally known and knocking on the Olympics’ door. In fact, her success was a driving force. Believe it or not, Alex was all about football as a kid and in middle school until he placed 1st at the Conference Cross Country meet in 8th grade. “I saw all the things my sister was doing and having so much success. I knew that I wasn’t going to play football in college, so I thought I could do more with running.” He went for it and kept at it. Turns out, it was a good choice. He has natural ability but says his success comes from having the right mindset.  “It’s all about putting in the work, having a mindset of ‘you’re going to be good at this’,” he says. “Coming to practice every day with intensity, believing in yourself at meets, not getting down on yourself. It’s a difficult sport, so just being able to embrace the mindset and knowing this is going to be hard - going out and doing it and loving it.”


While he accomplished a major feat already, he’s not done setting goals. This Friday is the Conference meet where he hopes to win titles individually and as a team. Then, his sights are set on State June 2nd, “I want to go under 9 minutes at the state meet and win a state championship.”


After that, he’s looking ahead to a midwest contest in Wisconsin to represent Michigan in a mile run; his goal is 4:10. He then races the New Balance Nationals in North Carolina where only about 30 kids from across the country will race, June 15-17.


He’s talking with colleges and will make his decision after the cross country season in the fall.