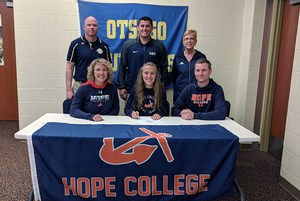 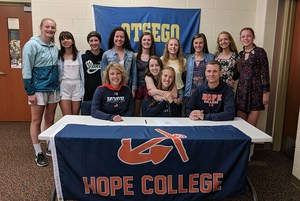 Senior Maddie Marciniak got the total package when it comes to hopes for her future. The college she wanted and the chance to keep competing in cross country and track.

Hope College is the choice for senior Maddie Marciniak. She made the choice official with the signing of her papers to continue her cross country and track career. But it was the school that came first, and being able to run was icing on the cake. “If I chose a smaller school for my education, I was hoping to run there,” she says of her college search. With Hope, It’s the “total package” she says. “When I found out I got accepted to Hope, I was like ‘yes! I get to be a part of the team and a super beautiful school.’”

She’ll run cross country, indoor track and outdoor track. Her love is cross country, “I just love the atmosphere of running cross country,” she says. She started running in middle school, but was a lot less competitive then. She got the competitive bug as she joined the high school team. That year, the girls’ team was the state runner up. The next two years, she was a part of the state championships teams, coming in all-state individually, too, in 27th and 19th places respectively. Her senior year, the team placed 4th at state and she was all-state again coming in 23rd.

“Insane,” is how she describes being a part of such history at Otsego, “Especially because I thought second was unbelievable, and then winning and winning again, I loved being around all of the girls and the best moments.”

She says the girls on the team are all best friends. “Running is just running if you’re not with your team. They inspire you to push when you don’t think you can.” Along with being a 3-time all-state runner, she was all-conference 4 times, all-region 4 times and 3 times all-county. She’s looking forward to continuing the success at the next level. “I’m ready to go and run for them; having it be official is exciting.”

For academics, she’ll study exercise science programs and kinesiology in hopes of being an occupational therapist.