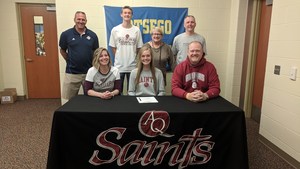 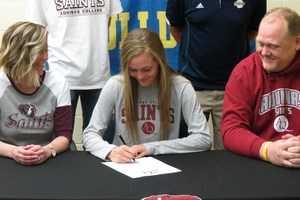 Jaycie Callaway comes from a basketball family and her journey won’t end in high school. She’ll continue her basketball career at Aquinas College.

“I’m excited. Nervous and excited both,” says Jaycie of making it official to join a college basketball team. She’ll be a Saint next year for Aquinas College. It’s always been a goal of hers to play basketball in college. “I couldn’t imagine not playing next year,” she says.

Just as she’s ready to join the team, the coaches are excited to have her. They say Jaycie is a good fit for the team and they see her potential, “We look for those who will continue to grow and get better,” says Head Coach Linda Nash, “With Jaycie, she has great length she has the ability to shoot the ball. With her athleticism and character, she’ll represent Aquinas in a bright way.”

Callaway has been playing basketball since she can remember. “My dad and I would always play in our basement in our old house. My dad used to be a coach so I would always hang out with his team,” she recalls. Her dad, current OHS JV Boys Basketball coach, Corby Callaway, used to coach the Allegan Varsity girls team. He played basketball in college, as well. (Fun fact: He actually played for U of M coach John Beilein during his days at Canisius College in New York.)

Jaycie was a 4-year starter on varsity and was a part of the 2016 and 2017 District Championship teams; both times they made it to the Regional finals. She was 2-time All-Conference and Honorable Mention for the 2018 Kalamazoo Gazette Girls Basketball Dream Team. She’ll join the Aquinas team as a power forward, playing more outside. She knows it’s a different ball game in college and that’s a welcome change, “They play at a much faster pace and there’s a shot clock which will be hard to get used to,” she says, but “I’m excited for the faster pace.”

Academically, she’ll study to be a child-life specialist with hopes of someday working in a hospital and helping children prepare for surgery or treatments.