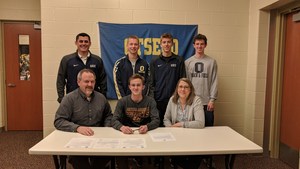 His senior year, Will Finch became the 2nd fastest runner of all time at Otsego and now his life course is taking him to Central Michigan University to continue his cross country success.

At the start of his high school career, Will Finch would have said soccer was his sport. But he just made it official and signed his letter of intent to run cross country and track at Central Michigan University, “It amazes me that I’ll be running in college for my sport because going into high school I was a soccer player and hated running so a lot has changed since I was a freshman,” Finch says.

It isn’t common to do two sports in one season, but his freshman year, Finch participated in both soccer and cross country and got hooked on the course. He might be surprised how it all turned out, but those around him aren’t shocked at his success. Even in middle school he would finish far ahead of the pack. He’s been a steady force throughout his high school career. He was All-State his sophomore year as a part of the State Runner-Up team and this year, he, along with teammate Alex Comerford (junior) broke the school record held by OHS Athletic Hall of Famer Tommy Brinn. Alex holds the record, but that run made Finch the 2nd fastest runner in Otsego school history. “A 15:40 is ridiculous,” says Coach Long of Will’s record-breaking performance this year. He’s not surprised he’s headed to compete in Division 1, “Will is the caliber of kid, if I was a college coach, I would be interested in recruiting him. He’s just that good.”

Finch also placed 4th in the State Indoor Track meet running a 4:17 in the mile. But when asked about his legacy at Otsego, Finch points to his teammates - Comerford and sophomore Hunter Zartman. “Those two guys are some of my best friends and the best teammates you could have and it’s been a blast running with them just about every day for the past few years.” He says Comerford deserves to hold the record and wouldn’t be surprised to see Zartman take either one of their spots.

Coach Long says those three just work hard and make each other better, “They push each other and are amazing athletes.”

Finch was All-Conference all four years, All-Region all four years and All-State his sophomore and senior years. He was a part of the 2015 State Runner-Up team which is a highlight of OHS, “Being on the podium with only 5 other guys, Coach Long, and a state trophy was definitely my favorite moment from high school sports.”

Joining a Division I school, Finch will now compete with the best of the best which is one thing he’s looking forward to, “I think it’ll be fun racing against the best runners in the nation knowing that some will be future professionals,” he says. He’s also looking forward to competing against friends from other college teams that he’s known from high school.

Finch plans to study business and marketing in college and is graduating high school with honors.