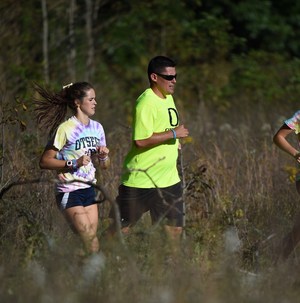 Steve Long has been coaching cross country at Otsego for 19 years and has brought Otsego to a level other schools aim for in performance. Now, he’s getting regional and national recognition for all of his accomplishments. He has received a Coach of the Year award for the Central Section of the National Federation of State High School Associations and is one of eight finalists for the National Coach of the Year from the National High School Athletic Coaches Association. Both awards are for girls cross country.

“To me, this is really recognition for our program and the amazing kids that are committed to having fun, working hard, making sacrifices and believing in one another 365 days a year,” says Coach Long. “Our success doesn’t come from what these kids do for two months out of the year. It comes from a commitment to excellence every day. They are daily examples of what it takes to be successful, and you can see that driving down the streets of Otsego. It won’t take long before you pass two or three or more of them.”

Otsego High School Athletic Director John Kubiak says that his record in the conference and the way the teams perform at the state level speaks for itself but he receives these accolades for what he’s done with the program, “It’s the culture he creates that’s the most important thing. He has high expectations for this runners and his team; they are goal-oriented kids and the things he teaches are life lessons,” Kubiak says.

Long received the Central Sectional Coach of the Year award for Girls Cross Country. The Central Section includes the states of Illinois, Indiana, Iowa, Michigan and Wisconsin and is a part of the National Federation of State High School Associations. “This award denotes your status among the most elite coaches in your section, and as state coach of the year for your sport,” reads the letter announcing his award. Long was nominated by the Michigan High School Athletic Association (MHSAA.)

Long was also named a finalists for National Coach of the Year for Girls Cross Country by the National High School Athletic Coaches Association. The finalists will be honored at an awards banquet in June, in Sioux Falls, SD. The winner of National Coach of the Year will be named at the banquet.  Long was nominated by the state’s high school coaches’ association. The selection was based on longevity, service to high school athletics, honors, championship years, and winning percentage.

Along with these two awards, Coach Long has also received a number of coaching honors:

“It’s pretty special when you’re being recognized at the national level,” Kubiak adds.

Long adds that his recognitions are also for the families and community that support the kids, “The families of these kids are there cheering, support, volunteering and helping to make this program great. The OXC program is one big family, and I am so very blessed to be a part of that.”

Here is a list of the major accomplishments of his runners and teams over the years: