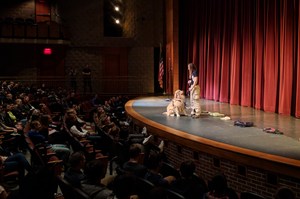 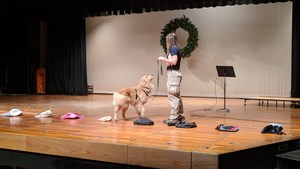 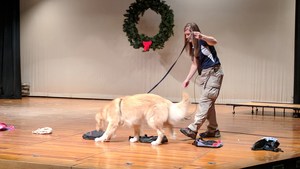 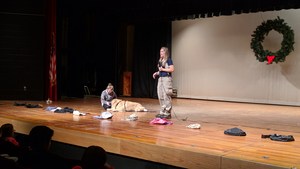 Safety is a top priority for Otsego Public Schools to ensure teaching and learning is occurring. Over the past few years, Otsego has utilized drug dogs to go through the school to detect unlawful substances. This year, Otsego is contracting with a new company called Interquest Detection Canines. The dogs are contraband dogs which are trained to find alcohol, drugs, medications and weapons. (While students can take medications, they must have them registered in the school office with parent permission.)

"We go to schools and businesses to help keep the locations safe and free from contraband," said Kim Hayes, the presenter from Interquest who brought her dog, Zeus, with her. She talked with the students about the organization, what they might see when the dog comes into the school and stressed to the students that just because the dog alerts on a locker or car, does not mean anyone has done anything wrong. The dog might pick up on medications the kids are allowed to take, but just not registered properly with the office; the dog might pick up on alcohol from a bag of empty cans that need to go back to the store.

"This is part of our education and prevention efforts to keep our schools safe," says Superintendent Jeff Haase. The district made sure to bring this assembly into both the middle and high schools before any visits so students understood this safety practice and hopefully discourage them from making a decision to bring something to school that they shouldn't.

After Hayes spoke about what they do, she and Zeus put on a demonstration during the assemblies. She had several bags on the stage, two of which held banned substances. When Zeus goes to work, he sits next to the one that he senses has contraband. If he's correct he gets his toy until it's on to the next search. Zeus was a hit among the students. He went to the audience for praise after he did his job.

Interquest is not a law enforcement agency, so any alerts from their dogs go directly to school administrators who then take the proper steps depending on the situation; this could mean school discipline or contact with law enforcement. They would follow the handbook. Each stop might include a different type of search, from parking lots, to lockers, classrooms and locker rooms. Only administrators will know when the dogs visit and how many times throughout the year.