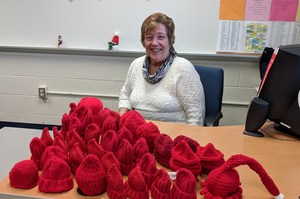 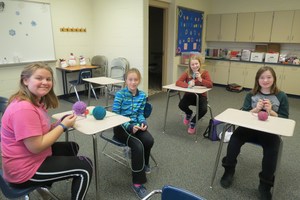 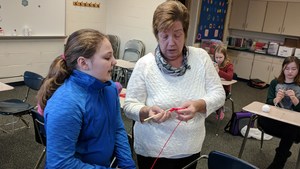 One of Otsego’s Parapros is helping to bring awareness to heart disease with her knitting talents and she’s hoping some of our students will do the same in the future.

Karin Laws has a talent for knitting and she shares that talent each week during an enrichment session at Otsego Middle School. Many students have learned how to knit from her and she’s hoping her youngest group of 6th graders will keep learning to eventually join her in giving back.

Over the past couple months, Laws, her mom, Vivian Reed and a friend, Marilyn Campbell, knitted 36 tiny red hats for “Little Hats, Big Hearts”. It’s a special project from the American Heart Association. February is Heart Month, and the AHA asked knitters and crocheters everywhere to help. Last year, they received 90,000 red hats that would be given out to babies born in February across the country.

Laws will be sending them out soon, not knowing where they’ll go. She’d love to see a picture, but doesn’t know if any will be taken, “It would be cute to see the babies in them,” she says. She’s excited to do this again in the future and add it to other charitable projects she does. She frequently makes fleece blankets to keep on hand for families in the case of a fire or other emergency along with some friends of her from church. She is also making more hats and blankets for babies.

Even though her hats likely won’t be worn in west Michigan, it’s neat for her to be a part of a national project, “That would be the other cool thing, to see how far away people are” who are knitting the hats. She's hoping that her current 6th grade knitters will be ready to make the red hats when they're in 8th grade for this national project.