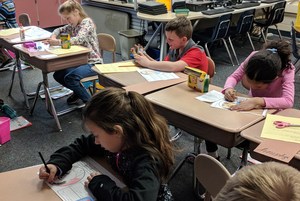 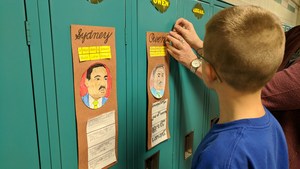 Students across the district were honoring and celebrating the work of Dr. Martin Luther King, Jr on MLK Day. Here's a look at one project that proudly hangs in the hallways.


“He wanted to help people get together, to be friends,” says Sydney Timmons of what she learned about Martin Luther King, Jr. “He wanted to be friends with white people.” She says to keep his dream alive, she would “celebrate his thoughts and show peace to the world.”


“His dream was that white kids could go to school with black kids and they could play together,” says Brenna Yocum, “because they could have fun together,” she added.


Students each came up with their own answers but all learned the common themes that Dr. King fought for including non-violence, freedom, love, rights, desegregation, and fighting for fairness, “I think he was really good,” says Garrison Busscher, “He fought for laws, he fought unfair laws. He had many marches with people, black and white.” Many students say that learning about Dr. King taught them not to judge people by how they look.


All of their creations are now hanging on their lockers for them to reflect on Dr. King in the days to come and for other students to see what they learned.