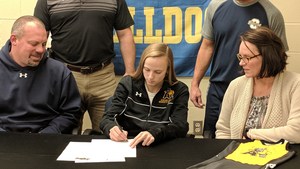 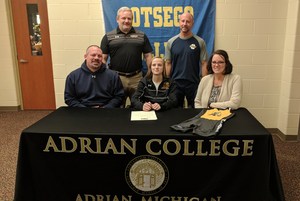 Senior Jaidin Clemens will go from an Otsego bulldog to an Adrian bulldog after committing to Adrian College for wrestling.

Senior Jaidin Clemens made her plans official to wrestle at the collegiate level; she signed her letter of intent to join the women’s wrestling team at Adrian College.

Clemens has been wrestling since was five years old, “All of my brothers wrestled,” she said as to how she got into the sport. “I like the physicalness of it. I like more physical sports, hands on.”

She’s been preparing for this and hoping to reach this goal of wrestling in college. She’s been on a travel team for years going to statewide and national tournaments. Clemens has brought home several 1st place wins at her contests, one of the largest in Oklahoma City. She also qualified to be on the junior Olympic team, but hurt her hand and was only able to serve as an alternate.

This is typically a male dominated sport, but all-girls teams are growing opening the doors for more females to join. Clemens sees both opponents. In her travel tournaments, she wrestles other girls, but on the high school teams, Clemens says it’s rare to have a female opponent, especially in her 103 weight class. But both prepare her for her future because she gets practice at two different styles of wrestling, “Girls are more squeamish and flexible, boys are more about strength,” she explains. She joined the OHS wrestling team this year to keep in shape and get more practice in on the mat before college. She’ll pick back up with her travel team in the spring. She’ll join an all female team at Adrian where Coach Cliff Cushard is excited to have her. He’s known her and watched her wrestle since middle school.

“She’s always been tough, real aggressive, and she’s always happy which is a nice plus,” Cushard says, “I’m always looking to recruit girls with character and hard workers and Jaidin fits that perfectly.”

OHS wrestling coach Brian Sparks would agree that Clemens has an incredible work ethic and has been a great addition to the team this year, “Just five or six matches in, she’s already got big pins, scored some big points for us,” he says. He’s excited to see her sign to wrestle at Adrian, “It’s pretty sweet she gets the opportunity to wrestle at the next level,” he adds.

Clemens is looking forward to attending Adrian College, a smaller school with smaller class sizes. She plans to study criminal justice to become a police officer, “I feel like it’s my style of work, having something different every day.”