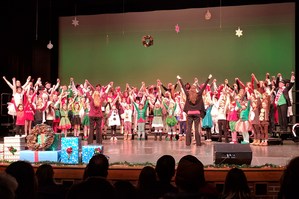 The Otsego Stars 4th & 5th grade choir group put on a fantastic performance of "The Lights of Jingle Bell Hill" for their first concert.
More than 80 4th and 5th grade students across the district joined Stars this year and just completed their first of two concerts for the year. This group meets once a week after school and puts on two concerts each year. Their holiday show in December is a mix of music and acting in a fun play. This year's musical was "The Lights of Jingle Bell Hill" where a new family comes to town and learns all about the traditions of the Christmas decorating contest. They learn how all the different neighborhoods are decorated - by elves, reindeer, snowman - and they also learn about that one house on the hill that never participates. "Scary Larry" owns that house. But the new family in town reaches out to Larry to join in the spirit. They find out that Larry is Santa's brother and because life is tough being the brother of Santa Claus, he doesn't like Christmas because he can't live up to his brother. The town tells him he just has to be himself and he joins in the festivities!
Dozens of students had solo singing parts or speaking parts and did a great job in their show.
The second concert of the year is all music and, this year, will feature Disney songs. The students are very excited about getting to work on their next show. Mark your calendars for February 27, 2018, 7pm to check out their next performance; it is held at the Otsego High School auditorium. Admission is free but donations are welcome.
Check out the photo album from the concert on Facebook.
Published December 6, 2017 Print