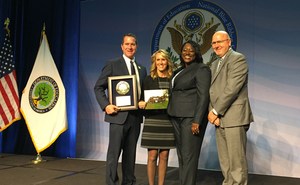 Of 130,000 schools in the United States, Dix Street Elementary was one of 342 schools recognized this month in Washington, DC as 2017 National Blue Ribbon School award winners.

The NBRS program invites the school’s principal, a teacher and the district superintendent to participate in a two-day event where they networked with other blue ribbon schools, heard from the national Teacher of the Year and receive their official award and recognition. National Blue Ribbon schools represent a very small portion of all schools nationwide, “To reflect on what Dix Street Elementary has accomplished is just amazing as there are over 130,000 eligible schools but only 342 were selected to the highest level of excellence in our nation,” says Supt. Jeff Haase.

Through a lottery, Gina Watson, a first grade teacher at Dix Street, represented the staff in DC, “It was such an honor,” she says. She carried a staff photo with her on stage and everywhere they went so that the entire staff could be with them in spirit. The day of the award included congratulatory remarks from U.S. education Secretary, Betsy DeVos. There was music playing throughout the event to announce each of the schools winning the award, “Excitement was in the air as soon as the ceremony began. The ceremony was definitely a celebration for all the hard work of students, educators, families, and communities.

Dix Street Elementary received a plaque and a flag that lists its accomplishment as a 2017 National Blue Ribbon School.