Mr. Alkire is FOX 17 Classroom of the Week Winner 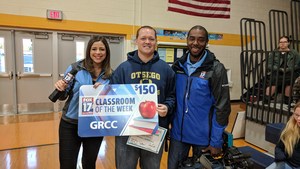 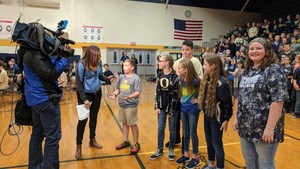 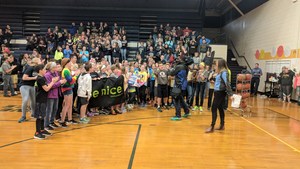 Friday started with an all-school assembly at OMS to be live on FOX 17 for their Classroom of the Week announcement.
A phone call on Wednesday from FOX 17 turned into a fun Friday morning at OMS. We learned that one of our OMS teachers was nominated for the Classroom of the Week for FOX 17. This year, FOX 17 has been traveling to the school that is chosen and helped host an all-school assembly while putting cheering students live on TV all leading up to the big announcement of who the winner is for the award.
At 7:30, students were in the gym standing and cheering for their school! There was a full agenda where kids played games, held a 3-point contest and the band played the fight song and "Shut Up and Dance" for a dance contest! Students did a lot of cheering for OMS while report Alyssa Hearin went live from the school. During one of the segments, she interviewed students about the Project Lead The Way engineering class and our STREAM School.
At 8:15, principal Melissa Koenig helped with the big reveal by giving the students a hint at who the winning teacher would be. "This teacher teaches science," she says. "This teacher is a coach. And this teachers loves the outdoors." Many students began pointing toward Mr. Alkire, the OMS STREAM School teacher as they made the announcement that he was the winner. He receives $150.
"This is great," Alkire said as he accepted the award, "I truly appreciate whoever the person was who nominated the classroom, I have a great bunch of kids. It's been fabulous to be here, this is my second year here after teaching in another district for a number of years. I've been welcomed by the Otsego community and really appreciate the support of our administrators and also the great teaching staff we have here and our wonderful kids."
http://fox17online.com/2017/10/20/oct-20th-mr-alkire-otsego-middle-school/
Published October 20, 2017 Print