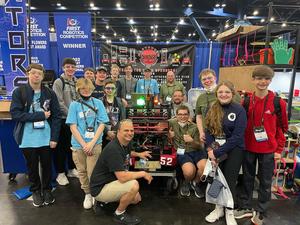 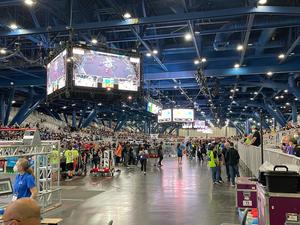 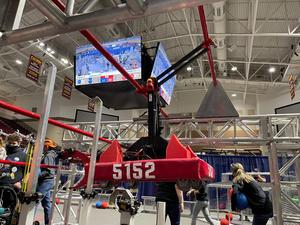 "Being on a worldwide stage representing Otsego… it doesn’t get any better than that.” The OHS Robotics Team makes history by qualifying for the World Championships.

The OHS FIRST Robotics team made history! They had a great performance at their first FIRST Robotics Championship tournament held in Houston April 24-26. They ended their run placing 33 out of 75 teams. The top eight teams in each of the six divisions chose their alliance partners to move on to the next round and our Alotobots didn’t get chosen, but they are not hanging their heads, they know they have a lot to be proud of, “To go to Worlds for the first time in Otsego history is a great honor and it shows our commitment to our program and what we’ve been moving toward since we started,” says Michael Miller, Robotics team advisor and OHS Computer Science and Engineering teacher. “Being on a worldwide stage representing Otsego, it doesn’t get any better than that. To be able to show what a small town does, that means a lot.”


“It's super cool to be part of a history-making team for Otsego. We've never had a team make it so far in the state competition, let alone qualify for worlds,” says senior Ben Bickel, who’s been part of the team for two years. “I know that everyone involved has put in an immense amount of hours, especially our mentors. It feels great to know that all of our hard work is paying off.”


To make it to the World Finals, they had to place in the top 64 in Michigan to qualify. For Michigan, that means they’re in the top 5-7% of teams; Michigan has the highest concentration of FIRST Robotics teams with 450. Before that, they compete in two regional competitions where they earn points through their tournament play with wins and losses and tournament awards; this year they captured both the Quality Award and Design award along with making into final rounds at both their tournaments. The top 160 teams in Michigan go on to compete at the state level, where the top 64 are invited to Worlds.


The high school FIRST Robotics competition season begins the first weekend of January when they, along with every other FIRST Robotics team, learn what the challenge for the year will be. This year, the challenge was called Rapid Release. Each team gets a basic kit to begin building their robot, but everything else is up to them. The students have to design, build and program their robot to complete certain tasks within the FIRST challenge. This year, two of the tasks included throwing “cargo” into a high net and getting their robot to climb at the end of the challenge. Each of the different tasks earns them different points.


Otsego High School launched their very first FIRST Robotics team in 2014. Each year, the team gets stronger and performs better. “I have no doubt we’ll be back,” Miller says of the World Finals.


Miller says they had three goals going into this competition. First, having fun. He wanted to be sure they took in the entire experience. From flying to Houston, to riding the bus system, to being able to interact with people from all over the world. In their bracket, there were teams from Australia, Mexico and throughout the United States.


Secondly, they came to compete. “The competitive nature of our team is that we want to compete, we want to do the best we can, we’d like to win it,” he says.


Otsego has Robotics teams in both middle school and high school. The OMS Robotics season is in the fall.