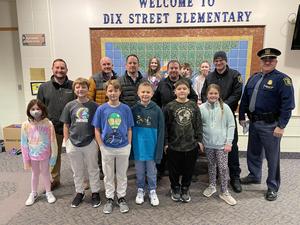 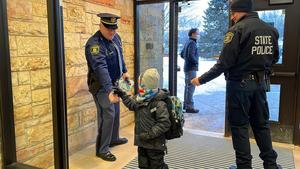 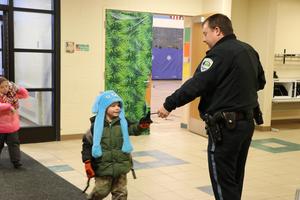 To show their support and appreciation for our local law enforcement officers and agencies, Dix Street Elementary invited the Otsego Police Department and Michigan State Police to join them in greeting the kids as they arrived at school Monday morning, a day after Law Enforcement Appreciation Day. The officers manned both entrances and handed out pencils to students, many of them receiving handmade thank you cards in return that kids created over the snow days.


This is the first time Dix Street has held this event; the idea came from PTO president Caitlin Moore and principal Mark VanderKlok fully supported the idea. “Without hesitation I was on board. I grew up next to a family whose dad was a State Trooper and his son (my best friend) became a State Trooper himself,” VanderKlok says. “Law enforcement have been under a lot of stress much like the rest of public service workers the last few years and I thought this was a great way to brighten their day. I also saw this as a great way for students to see police officers in a positive way and as a friendly face who is there to help in a time of need.”


It did brighten their day but they also brightened the kids’ day! The kids loved having them as greeters and showed their support with words and cards. You could hear a lot of “thank yous” and a few thank them for their service. VanderKlok felt this would be a win-win. “A lot of the students, you could tell, were excited when they were greeted by an officer. One student found me at lunch and told me that he was so glad he met a real life police officer because that is what he wants to be when he grows up. Another kindergarten student told me multiple times throughout the day ‘I got to meet a police officer’ with the biggest smile on her face,” he added.


Multiple teachers and parents sent their gratitude for the recognition. This is surely to become an annual tradition.