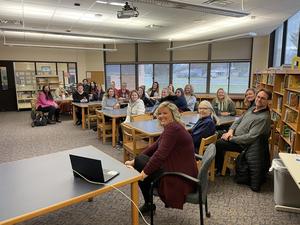 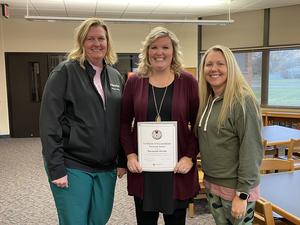 It was a special week to honor one of our own as she received the Red Cross life-saving award for her quick thinking to save a co-worker, friend.

The American Red Cross honored Michigan’s Life-Saving award recipients this week, and OPS’s Savannah Devine was among them for her heroic efforts in coming to the emergency aid of Dix Street Elementary Physical Education teacher, Darcy Bentley, when she suddenly went into cardiac arrest.


On January 26, 2021, Savannah Devine, Dix Street Elementary’s Office aide, insisted on taking PE teacher Darcy Bentley to the hospital when she wasn’t feeling well and had concerning symptoms. On their way to the hospital, Bentley experienced a cardiac emergency. Devine called 9-1-1 and relied on the CPR training she had in school as she was coached through what to do until paramedics could arrive. Her actions saved the life of her co-worker and friend. Surrounded by Bentley, Bentley’s family, their Dix Street family of co-workers and friend Roxanne Bronkema, who nominated her for the award, Savannah accepted her award at the virtual ceremony.


“I knew as I heard this story unfold in January and when we knew Darcy was going to be OK  that it was a true miracle,” Bronkema says. “Most people don’t generally survive this type of event in the hospital let alone in a vehicle on the way to the hospital. I was and am so thankful Savannah responded the way she did.  It is a well deserved award for my friend. I am very proud of her.”


“Receiving this award from the Red Cross was an eye-opening event,” Savannah says. She’s always known she saved her life but felt like she did what anyone would have done in that situation. “But hearing the stats of life-saving events from the Red Cross staff today changed my way of thinking. I learned not everyone is capable of performing life-saving services and not everyone does jump to action.”


Devine has been called a hero many times in the last year, and would just smile. But the Red Cross presenters also used that word during the ceremony to really highlight the extraordinary efforts of those honored and their bravery in coming to the aid of someone in need. “I’m so thankful that I took action that day and was able to save my friend’s life,” Devine added, “Today, I accepted the fact that I truly am a hero.”


Bentley calls her her Heart Hero. “I am so grateful she took action so quickly and did such an amazing job!  I would not be here today if it weren't for her,” Bentley says. “She is such a good friend, but now we have a special connection that most people never have. I am so thankful that she was so brave that day.” The ceremony brought back a lot of emotions for Bentley, she knows that the statistics are alarming for someone going into cardiac arrest and living. “I know Savannah thinks she was just doing the right thing that day, but she is my Heart Hero and always will be.”


Devine’s award is officially called the Certificate of Extraordinary Personal Action, and was first presented in the 1950’s. It is for those not professionally Red Cross trained, but step up in a time of an emergency. “All of these awards and their recipients embody the spirit of the Red Cross by using action to help alleviate human suffering in the face of an emergency,” said Mary Lynn Foster, the Regional CEO of the Michigan Red Cross. Devine was one of ten people honored in the ceremony on Monday and one of six people to receive the Certificate of Extraordinary Personal Action.