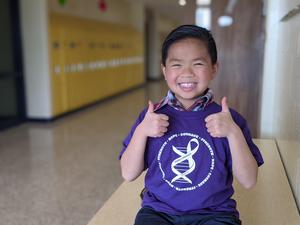 Each purple week, we highlight a personal story that connects with the cause. This year, 5th grader Danny Truong is serving as one of our honorees.

Van Andel Institute is less than 45 minutes away from Otsego, yet is a global leader in medical research for a number of illnesses impacting our lives, such as different types of cancer and Parkinson’s Disease, which Otsego's Purple Week supports. Their scientists, who come from all over the world, work daily in research labs right here in Grand Rapids to make groundbreaking discoveries.

This type of medical advancement is what so many patients long for, like Danny Truong. Diagnosed with a brain tumor 4 years ago, when he was in first grade, Danny is now facing a new, heartbreaking reality of a growing tumor and unknown future. Danny will be a part of our Purple Week activities and start the 5K fun run/walk on Saturday, May 22nd.

As doctors look into what exactly they are dealing with, the Truong family hopes for a medical miracle to help their 10-year-old boy. This, as medical bills rack up.

Since he was in preschool, Danny has been a source of happiness at Washington Street Elementary. He lights up a room with his own smile, and his personality brings out the smile in everyone around him. He shares his culture with his teachers and classmates each Chinese New Year by telling others what the year means and handing out gifts. He has a signature dapper look, always dressed to the nines and often in a tie. In addition to serving as a Purple Week honoree, the high school National Honor Society is selling grey iron-on bow ties for people to put on their purple week shirts. Proceeds from that sale will benefit Danny's family to help with medical expenses and family needs during this difficult time.

Despite his initial diagnosis and ongoing battle, Danny continues to fight on, giving a “thumbs up” to any situation. He’s happy to be able to be a part of this year’s Purple Week and is an encourager to those who are also fighting an illness and supporting medical research.

Get Involved in Purple Week 2021

Purple Community is a fundraising arm for Van Andel Institute, a global medical research facility located in Grand Rapids. 100% of funds donated to Purple Community go directly into the research lab, most often serving as seed grants for scientists to do groundwork on theories and discoveries setting them up for larger grants. Scientists work on research with cancer and Parkinson's among others.

Otsego Public Schools held its first Purple Game in 2010 raising $10,000 for the cause. OPS hosts events every other year and in 2014 turned it into a week-long celebration. A number of our sports teams go purple for the week, wearing specially-ordered purple jerseys with a name of a loved one impacted by illness on the back. OPS has raised more than $100,000 to date.