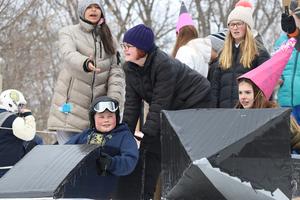 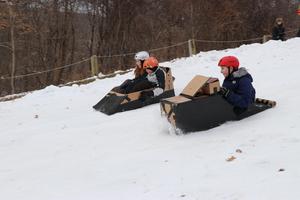 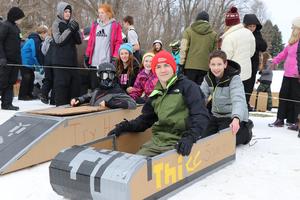 STREAM School students hit the sledding hill to test out their engineering skills of cardboard sleds!
The sledding hill was a fast one, but STREAM students engineered some strong cardboard sleds (with just cardboard and duct tape) to handle an afternoon of competition! There wasn't one design that was the same!
STREAM School students, who work on math and science mostly outdoors and on real-world projects, spent a few weeks designing and building a cardboard sled hoping to take the top prize.
Each team was guaranteed three races as they moved through the bracket. There were a few tumbles, and some lost some of their sled on their way down, but the kids had a blast!
Check out a collage of videos here.
Published February 14, 2020 Print