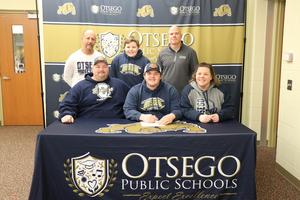 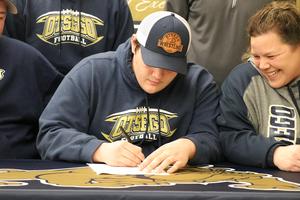 Three-sport athlete Jakob Slater is heading east after graduation to continue his football career as a Crusader for Madonna University.

As a leading lineman for Otsego, senior Jakob Slater is ready to step into a new arena with an entirely new team and program as he commits to play football for Madonna University in Livonia. He’s looking for competition at the next level to better his play, but also the opportunity to be on the ground level, “The new atmosphere and culture that surrounds a new start-up program,” he says.


Football has been a part of Slater’s life for 13 years, so to get to continue to play in college is a great feeling. “It feels great, just to show that all the hard work I put into it and having it pay off to play at the next level,” he says. Slater was named All-Conference LT his senior year and also participates in wrestling and baseball.


He says one quote from Kobe Bryant has stuck with him for his senior year: “The moment you give up, is the moment you let someone else win.” His team this year didn’t give up and that made for some memorable moments on the field, “The best moment that I personally had was the Dowagiac overtime game or the Vicksburg game when we clinched to go to the playoffs for the 2nd year in a row.”


Slater plans to go into sports medicine or sports science.