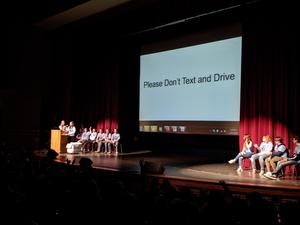 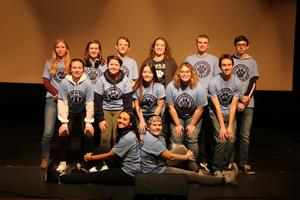 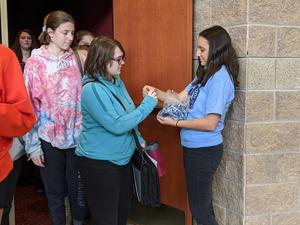 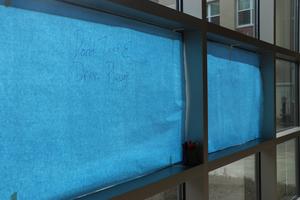 The OHS SADD chapter is taking on what they say is a major issue - texting and driving. For the last several years, OHS has received a $1,000 grant from the state to help fund a campaign and this year, they decided to focus on teens texting while driving. “The kids decided to focus on texting and driving because they feel it is a real problem and very dangerous,” explains SADD adviser Kelly Henry. “Every year more and more crashes involve people texting while behind the wheel. Many people feel that it’s okay to text and drive since they have never been caught or been in an accident.”


Students launched the campaign at an assembly last Friday afternoon with the theme "Put Down Your Phone If You Want To Get Home." They shared a number of statistics with students, showed videos and invited Allegan County Sheriff's Deputy Joe Bronson to talk about the dangers and law. Students handed out bracelets with their slogan to students and asked them to sign the pledge not to text and drive. The pledge is up on the windows in the cafeteria.


The assembly was just a kick-off of their safe driving campaign efforts. The students are also going to have a door decorating and t-shirt design contest. The winning class will get a party, t-shirts and bracelets. The winner of the t-shirt design contest will receive a $50 VISA gift card. “We are also going to have the distracted driving simulator at school sometime in March,” Henry adds. The group will plan a dress-up week that same week and ask students to participate and sign the pledge not to text and drive if they haven’t already.


The OHS SADD chapter is now an award-winning chapter. In December, they received the official letter that they were given the 2019 Outstanding Traffic Safety Achievement Award from the Governor’s Traffic Safety Advisory Commission. “We were very happy and excited that we won the state award. This award is a culmination of the work that the SADD groups have done over the past 4 years. The students have worked really hard over to plan activities to increase awareness about distracted driving.”