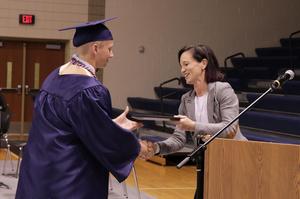 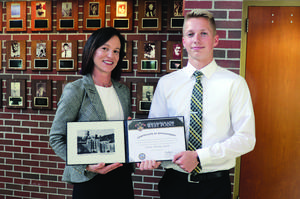 For the first time since 2005, an Otsego High School graduate has received the prestigious appointment to attend West Point Military Academy.

“West Point has been a dream of mine since 5th grade, but it became a real goal when I was in 8th grade.” He first visited West Point the summer of his freshman year for an admissions tour to learn about the application process. That started in January of his junior year. Now, almost two years later, that dream is a reality. “It now feels surreal. I’m very excited to join the Long Grey Line and be a part of something bigger than myself,” he says.


At the Senior Swingout ceremony, West Point Admissions Officer Amy Rummel, presented Grile with his official certificate of appointment and shared words of this incredible accomplishment and the road ahead. “It’s important that we all realize the magnitude of this tremendous opportunity and responsibility,” she stated. She said one of her favorite things about West Point, is that “cadets learn to overcome failure, and be humble in their successes. Owen will do this while quietly, yet confidently, wearing the uniform to ensure what we take for granted every day - our safety and our freedom.” Of the 16,000 applications sent to West Point, 1,150 of them were accepted. “This young man has proven he has what it takes,” she said. Along with academic courses, he’ll take part in physical military training, required athletics, moral and ethical training and leadership development. “Cadets at West Point possess character, grit and the desire for challenge to become something so much bigger than themselves. They are trained to become one of the greatest leaders for our nation’s future generations as commissioned officers of the United States Army.” Upon graduation from West Point, Grile will be an active duty officer of the United States Army.


“The work that lies ahead of me is just another step towards improving my character and leadership,” Grile says, “After West Point, I hope to branch infantry and go to ranger school.  Although I have a plan for myself, I believe that my experiences will shape my future path and goals.” He reports to West Point on July 1st for basic training.