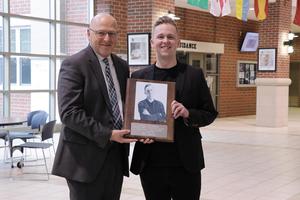 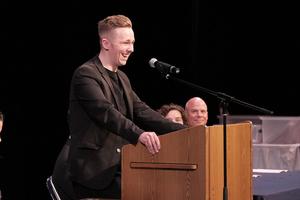 OHS '11 graduate, AJ Pruis, now calls Nashville his home as a songwriter, musician and singer, but returned to Otsego as the alumnus of the year.

Some of country music’s hottest stars are singing his tunes and Otsego is proud to name AJ Pruis the 2019 Otsego Outstanding Alumnus. “I am thankful and humbled by this honor,” Pruis says.


Pruis graduated from Otsego High School in 2011 and moved to Nashville to pursue his musical career. Over the last eight years, he has been writing, playing and producing music for many different artists and genres.


He’s had a #1 song, a top 10 song and a top 20 song. He is an award winner from the Nashville Songwriters Association International and American Society of Composers, Authors and Publishers. He was a nominee of the Dove Awards.


Pruis has been singing his entire life and started his first band when he was in 5th grade. In high school, he and his two brothers, Jeremy and Josh, had a band called Please Promise. With that success he moved into songwriting and had made it in the Nashville market. Pruis has written songs recorded by artists such as LOCASH, Thompson Square, Tyler Farr, Scotty McCreery, Hey Violet, Matthew West, Mandisa, Sanctus Real and many more. He has also had the opportunity to work with artists such as Little Big Town, Lady Antebellum, Andy Grammer, and Carly Pearce. “I’m so blessed to work with the artists I work with; thankful they let me be a part of their musical journey.” He co-wrote the song “All In” for Matthew West, which is featured in promotional ads for the ABC hit show “The Good Doctor” along with being featured during this year’s Super Bowl pregame show. He also wrote the title track for the movie “Unplanned” which is in theatres now. For the last five years, Pruis has been on tour playing keyboards and guitar for Matthew West while continuing to write songs.


In speaking to honors students at the OHS Honors Night, his overall message is perseverance and to work hard, “Hard work will get you further than talent. Nothing great or worthwhile comes easy. Things rarely happen when you want them too. Hang in there; good things happen when you don’t give up.”


Pruis spent the day at OHS speaking about his career, experiences and journey into the music business with choir classes. He listened to them sing, then sang for them, as well. “I hope my story can be an inspiration to all the dreamers out there.”