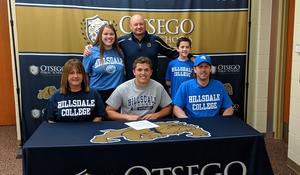 Baseball season will not end in 2019 for senior Jaekob Sallee who just committed to Hillsdale College for his athletic and academic future.

The pressure, of what his future plans will be, is finally off for senior Jaekob Sallee after being accepted into Hillsdale College for school and to play baseball. “It feels really good to finally figure out where I am heading off to next year. I could not be more excited to represent Hillsdale,” he says. He’s looking forward to the next level in competition with the Chargers, “competing against some of the best players in the Midwest, and being part of a team that has one goal together.”

Sallee has been involved with baseball since he was just five years old. He plays catcher for the Bulldogs where he earned All-Conference twice, All-District twice and All-Region. “My most memorable moment was winning the district title my junior year because that was only the third one in Coach Eldred’s time being head coach,” he says. His senior year is still in full swing, though.

In addition to baseball, Sallee participated in basketball, football, student council, National Honor Society, O-Club, the purple committee and was a class officer at OHS. He plans to study exercise science or biology.